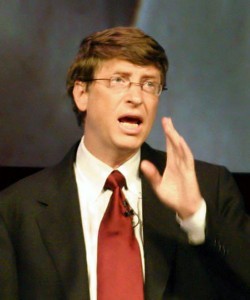 CNET Reported yesterday that Bill Gates the founder and driving force behind Microsoft is planning to step down in 2008 after years of leading Microsoft to the household and business brand it is today. Over 90% of the world’s computers run the Windows Operating system.

We all have different opinions about Bill Gates and if you read some of the ‘less friendly’ remarks on CNET you will no doubt believe (and understand why) he was disliked as much as he was loved (for want of a better word).

Here is our take on this: For many years we have built client’s websites and developed projects on the Windows and Apple platform. While Windows has not been perfect and remains this way, it still was used by the larger percentage of businesses, to this end we had to meet their needs. We can only look with awe at how Gates has driven this industry, yes his attitude is flawed, but show me the person who does not have flaws! Bill Gates just happened to be in the right place in history at the right time and had the right ideas. It’s true the behaviour of Microsoft has been one of creating a monopoly and squeezing smaller and talented business out of the market. To this end, we agree that Microsoft is guilty on all accounts of doing this and it has been a shame to see some great talent from these other businesses go to the wayside because of the monopolistic behaviour involved.

On the other hand, Microsoft has left a legacy whether we like it or not that will remain throughout history and their contribution to the world of PC’s whether positive or otherwise will be felt for many years to come.

In recent years we have seen more challenges to Microsoft’s dominance in the PC and Web market. In more recent times, challenges to Gates’ much vaunted Internet Explorer has marked and chipped away at the web browser arena. With browsers like Opera and Firefox playing roles. Firefox came at a time when the public were searching for an alternative to what Microsoft offered, which in our opinion shows that the dismay in the amount of security patching and the pricing of the Windows Operating system were beginning to show their strain on small businesses and consumers alike.
Bill Gates will leave at a time when Microsoft still sits as the world’s leader in the PC market. With the likes of Google aggressively going after (and wanting lead) a share of the web based market and prevailing in areas of the search industry it won’t be long until Google become a real threat and Microsoft gets left behind in this area, unless, the new Internet Explorer tied in with Windows Vista grabs it back. Nevertheless, it won’t happen under or more to the point won’t be on Bill Gates’ watch.

Well, it’s the dawning of the end of an era. Whether we like it or not, Microsoft has been influential or forced us at some point or another to use their products and build around them. Maybe, this will change now as more of choice without consequences becomes available.