Frank, our local mailman has a second-sight, I am absolutely sure of this – ask him about football results or the horses and he has an opinion that proves uncannily correct, at least most of the time. This morning he delivered a package from Microsoft and of course we enjoyed a little friendly banter and jokes about what possibly Bill Gates could be sending us. On shaking the box Frank announced, ‘it sounds more like he is sending you a rock” (more laughter).

As mentioned previously Frank is rarely wrong about things and today was no exception. I open the package and sure enough there it is, a rock mounted in a small blue Microsoft presentation box with the following inscription:

Let’s leave them no place to hide

On the back of the box in bold letters it states: ‘Let’s beat the cheats’.  By now I am really curious and sit down with my morning coffee to investigate further.  A small pamphlet accompanies the box contents in which it announces that Microsoft are coming to the city in where our company is based, and they are calling in on partners to find out if anyone is selling illegal copies of Microsoft software.  I am quite surprised that they would go to all this trouble but do have a little chuckle to myself about ‘the rock’.

My thoughts turned to… who gathered the rocks?  They must have sent out thousands of these stones.  Which unfortunate individual had the mindless job of picking up stones from some god forsaken gravel pit at 1p per stone and then package and dispatch them? I had visions of secretaries, office juniors and Microsoft tech support on their hands and knees atop of a heap of rubble sifting through the pile making their selection, and then loading the chosen mineral into a production line of buckets, with the Director of Marketing coming out and shouting:

Okay everyone you can take a coffee break now, then its back to the office for some coding…!

Here is a photo of the stone that Microsoft mailed to us: 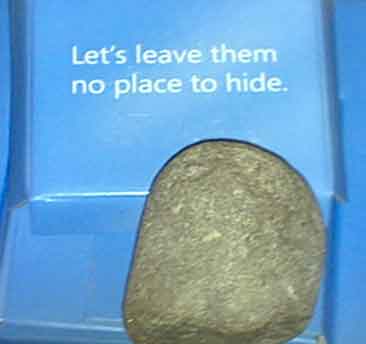 I have decided that if I get to build my own home I shall lay this rock in the foundation – who knows, it could be Microsoft’s Rosetta stone.