After a meeting with David Frankel of City Screams Interactive and Ed Merritt EMerritt Studios about the MyJournal project where we rehashed the build and then brainstormed about some of the ideas like free services I was quite buoyed to receive a link in my mail box to a article by Paul Graham discussing The Truth about Web 2.0 and the democracy of the web.
Paul goes onto wax enthusiastic in relation to subjects such as news and information as Paul rightly puts it:

The most dramatic example of Web 2.0 democracy is not in the selection of ideas, but their production. I’ve noticed for a while that the stuff I read on individual people’s sites is as good as or better than the stuff I read in newspapers and magazines. And now I have independent evidence: the top links on Reddit are generally links to individual people’s sites rather than to magazine articles or news stories.

Paul Graham is right in this respect, many people I know (including myself) read headline news but immediately shift onto ‘real perspective’ news from real people on highly informative blogs. One of the reasons I like to drop by Threadwatch is that very reason, they pick up news that relates to the industry I am in and disseminates the news with their own reviews and encourage participation from other industry professionals. You don’t get much better than that. There are several good services like this and Threadwatch is just one of them though aimed at the Search Industry.

All in all Paul’s article makes a good enlightening read and starts the mind racing. On the back of this article I have scheduled another meeting tomorrow to discuss how we can get this to work for the Search and Go project. 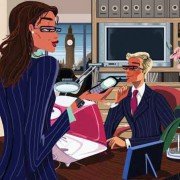 Just How Important is a Business or Company Blog?
0 replies

White Space as an Art Form